Donald Trump is dramatically expanding the federal government’s support for healthcare organisations that agree to not provide abortion services.

The State Department has announced a programme, called Protecting Life in Global Health Assistance, which will get $8.8bn (£6.8bn) to fund non-governmental organisations around the world that comply with the “global gag” rule. It that states that no organisation receiving US money can promote or discuss abortion services, even if they are using foreign funds to do so. 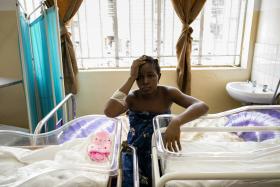 The rule is also known as the Mexico City policy, named for the location of a 1984 United Nations conference where President Ronald Reagan announced the measure.

The money will come from the US State Department, the US Agency for International Development (Usaid), and the Defence Department, according to CBN News.

Mr Trump reinstated the rule from the George W Bush administration, which prevents any foreign organisation receiving US funds from providing or even discussing abortion services with women.

The rule also prevents any foreign organisation receiving US funds to work with any abortion service providers.

Mr Bush excluded programmes that involved HIV/Aids prevention from the rule; Mr Trump, however, did not. Instead he expanded global gag to apply to all global health assistance funds, not just money allocated towards family planning accounts as Mr Bush had ruled.

This means that an organisation – even a foreign one that gets a funding sub-award from a US NGO that has received federal money – in a developing country that provides anti-malaria medication or other preventable disease care with US money could be excluded from receiving any global health assistance funds if they offer or even speak to patients about any type of abortion services.

Mr Trump’s version of the global gag rule left what many experts estimated was a $600m gap in abortion and family planning services that other countries’ aid agencies and private donors would need to fill.

This latest announcement will increase that gap by millions, if not more, depending on what organisations the order will apply to according to Akila Radhakrishnan, vice president and legal director of the Global Justice Centre.

She told The Independent this was not new federal money but an allocation of the budget for all global health assistance, which is about $10bn.

The Department of Defence seems like a curious addition to Mr Trump’s instructions, but the agency does receive funds for global health assistance, said Ms Radhakrishnan.

However, a White House official told CBN News that humanitarian, disaster, and refugee assistance from Usaid and Defence will not be affected.

The agency also said in its statement that “the policy will apply to all new funding agreements…and to existing agreements when amended to add funding,” however the total amount of existing funding for global health assistance will not be cut nor will existing contracts be broken.

Ms Radhakrishnan explained that “if a foreign NGO already has a three year contract for HIV/Aids related programming, they will not have to certify [compliance with global gag] in order to complete that contract. However, if that same contract is extended with additional money, then the Gag language will be added in.”

Global health experts have widely criticised Mr Trump’s expansion of the policy to include all health-related funding. Shannon Kowalski, Director of Advocacy and Policy of the International Women’s Health Coalition, told the The Independent that it “will be devastating. Instead of protecting life, it will increase maternal deaths by putting essential sexual and reproductive health care out of reach for far too many women. It is cruel and unusual punishment.”