Speaking to Journalists on the sidelines of a doctors demo at Parirenyatwa Hospital, Ngwenya said they were cognizant of the situation at the hospitals and that more people were at risk but they would not return to work until government heeds to their call. 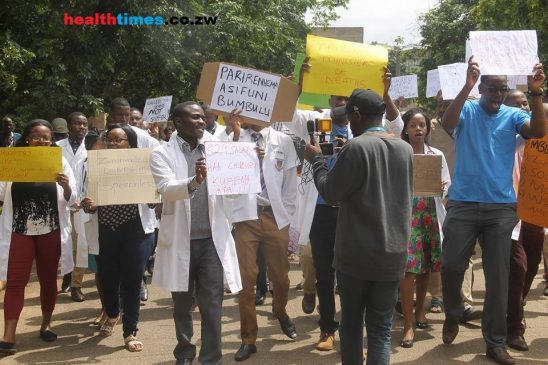 “We want our rural medical allowances to be paid to our members and we also want to import cars duty free among other issues. However what the ministry and the health services board have done is that they go to the media with cheap media propaganda saying issues have been resolved yet nothing has actually been done.

“So the promises they are trying to give, let it come come to us, let it be written in paper. Written under the health services board bipartite negotiation panel for us to present it to our members to say this has been the outcome so that we can go back to work,” said Dr Ngwenya

He added that the so called 50 percent increase being mentioned by government is a drop in the ocean and a robbery of double proportion to the doctors.

“Currently they are offering us what they are calling 50 percent increase, but it seems to be only 0.75 cents increase per hour, which is why we are saying let them stop in this media propaganda that they are embarking on and start looking at issues at hand because patients are dying and we are worried, we want to go back to work,” added Dr Ngwenya

The doctors strike has entered its 23rd day and signs of it ending soon are next to non given what the doctors are saying.

However, minister Parirenaytwa told parliament this week that they were still negotiating with doctors and they hope the issues at hand would be resolved as soon as possible.