MEDECINS Sans Fronteres (MSF), has upped efforts to reduce cases of Sexual Gender Based Violence (SGBV) through a number of initiatives which include setting up a Clinic at the Edith Opperman Clinic in Mbare as well as decentralising care to other clinics in Harare. 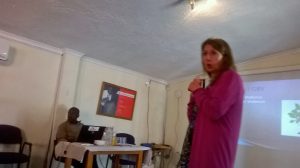 MSF Mbare coordinator An Vandeborne presenting at the media workshopSpeaking during a media workshop, MSF Mbare Project Co-ordinator An Vanderbone said Zimbabwe had made strides on the legal framework in terms of protecting cictizens against gender based violence but said more needs to be done on the awareness part, as less men were coming forward to report rape or sexual abuse cases perpetrated on them.

“At Mbare Clinic, we have been receiving 600 cases of GBV annually since 2011, but not now we are getting 100 reports every month.

“It is however worrisome to note that 90 percent of those who come to report are women and only 7 percent are men who for some reasons do not come forth when victimized. Societies should be taught on the importance of reporting a rape case within 72 hours as it prevents against a number of sexually transmitted ailments and AIDS,” said Vanderbone.

She added that only 44 percent of those raped report or come for treatment within 72 hours.

According to statistics released by the World Health Organisation (WHO), 1 in every 3 women has been sexually abused somehow.

“20 percent of women and 5-10 percent of men report being raped and 85 percent of perpetrators are known to the victims. Girls are three times more likely to be abused than boys. 22 percent of women say their first sexual encounter or intercourse was not consensual,” she said.

She also applauded the Zimbabwean government for successfully putting up friendly legal framework which has a multi-sectoral approach to GBV.

Meanwhile, key populations in particular sex workers, gays and lesbians shun emergency rape or emergency clinics due to various reasons chief among them being the fear of stigma and a highly homophobic society.